The establishment of the Nansei-Toko Observatory for Earthquakes and Volcanoes was approved on April 11, 1991 as a facility to promote earthquake and volcanic eruption prediction research in part due to strong requests by the local community.

In November 1994, a two-story building was constructed in Terayama, Yoshino-Cho in the northern part of Kagoshima City. After completion, the base of observations and studies were shifted to this new site from the main Kagoshima University campus site at Korimoto.

This observatory sits in a quiet environment at a prime location for direct observation of volcanoes, as it commands a close view of Sakurajima volcano over Kagoshima Bay and the Kirishima volcanoes Kaimon volcano in the distance

Sakurajima volcano as viewed from the observatory. In the distance, Kaimon volcano can be seen on the right, and the Kirishima volcanoes on the left. 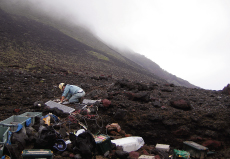 The main areas of study is southern Kyushu and northern part of Nansei Islands (north of Tokunoshima in Nansei-Toko Island Arc from south of Kyushu to east of Taiwan). In this area earthquakes and volcanic activity are frequently observed due to the steep subduction of the Philippine Sea Plate and the expansion of the Okinawa Trough. Additionally, five large calderas (Aso, Kakuto, Aira, Ata, and Kikai) are linked within an area of merely 260 km. This is a very unique phenomenon that cannot be seen anywhere else on earth.

A large amount of thermal energy is needed to create such phenomena. However, the conventional plate tectonics framework known as plate movement of the earth’s surface is difficult to account for such energy supply.

To solve this problem, it is necessary to create a new theory for earth’s dynamics based on a global ideas in considering the deeper part of the earth. Understanding of tectonics in“Nansei-Toko”(Nansei islands) will contribute to the understanding of plate movement in the entire Pan-Pacific area. This will surely lead to further contribution to the basic research in earthquake and volcanic eruption prediction. Thus“, Nansei-Toko Island Arc”can be said to be an important field for the development of earth sciences.